Home>Broadband News>Worst Areas for Broadband Outages in the UK – Is Your City Listed?

Worst Areas for Broadband Outages in the UK – Is Your City Listed?

There is nothing more frustrating and inconvenient than being disconnected from the internet... especially in the current climate when everyone is relying on their home broadband more than ever before.

According to a recent report from uSwitch, broadband outages seemed to have increased across the country over the past year. Millions have been left disconnected for hours on end, which has made working from home extremely difficult during the coronavirus lockdown.

On average, each home is said to have been left offline for 29 hours in total over the last 12 months… 28% experiencing the interruption during the working day! What is the impact of this? Well, uSwitch has suggested that it could have cost the UK five million working days and the economy more than £1.5 billion. Now if those figures don’t prove the importance of reliable broadband, we don’t know what does!!

Which cities were the worst affected?

Bristol took the clear lead as the outage capital of the UK, with each resident experiencing almost 170 hours of downtime on average! Brighton was named the second-worst affected city, but clocked a much lower average downtime of 89 hours. Not too far behind in third place was Plymouth, with 74.4 average outage hours per resident. You can find the full findings from uSwitch’s report below. 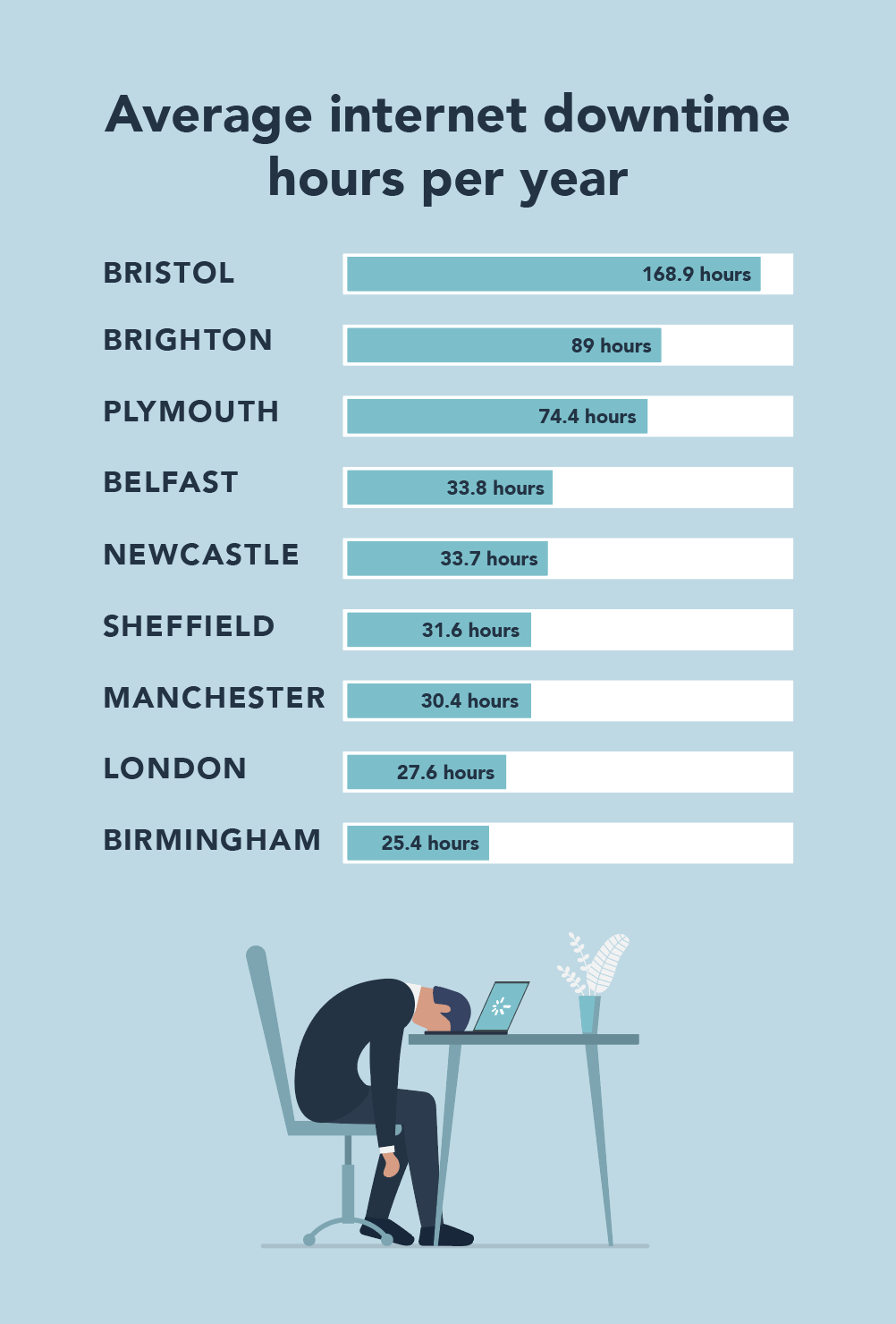 Bristol is top of the table with almost 190 hours of internet downtime last year.

The Welsh capital, Cardiff, seems to have the most reliable broadband connection in the UK! The residents of this city experienced the fewest number of outages, with only 1% of people losing connection in the same period.

What does uSwitch say?

“With so many of us still working from home, your broadband going down for even a few hours can be a major disruption with significant consequences."

“Lockdown life has made all of us rely on our broadband more than ever, whether that’s for work, or shopping, entertainment and keeping in touch with friends and family. Losing that vital link with the outside world is no minor inconvenience,” he said.

“So internet providers who fail to communicate effectively with their customers during an outage can make a bad situation worse if they leave people in limbo, not knowing when their service might be back online.”

What can you do during an internet outage?

Having a backup plan for internet outages is a great idea – especially if you have to work from home or home-school your children. For example, you could temporarily use your mobile data by connecting your laptop or computer to a personal hotspot.

Alternatively, you could buy yourself a portable dongle which plugs directly into your computer’s USB port and gives you internet when you’re on-the-go.

If you're unhappy with your current broadband service, why not look at switching? You could not only save money but get a better deal such as fibre internet.